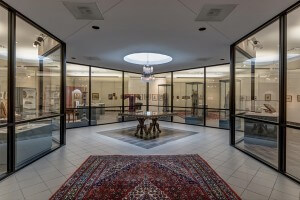 Exhibits in our Antiochian Heritage Museum celebrate the artistic, cultural and spiritual heritage of Antioch, where the disciples of Christ were first called Christians (Acts 11:26). The permanent collection includes:

A beloved early pioneer of Orthodox Christianity in the United States, Saint Raphael was born in 1860, and raised in Damascus in a devout Orthodox Christian family. He received his seminary education on the island of Halki in Turkey in preparation for becoming a priest and bishop. In 1895, he arrived in New York to pastor its Arabic-speaking Christian community, and in 1904 became the first Orthodox bishop to be consecrated on North American soil. He traveled the continent, tirelessly serving Orthodox communities throughout America until his death in 1915. Originally buried in Brooklyn, New York, St. Raphael’s remains were brought to the Holy Resurrection Cemetery on the grounds of the Antiochian Village Camp in 1989. He was recognized as a saint in the year 2000. A permanent exhibit honoring Saint Raphael includes liturgical items as well as an interactive touchscreen dis-play.

Library Hours:
Monday through Friday 10 am - 4 pm
And by appointment

Interested in donating items to our collection? Please read our Donation Policies & Procedures.